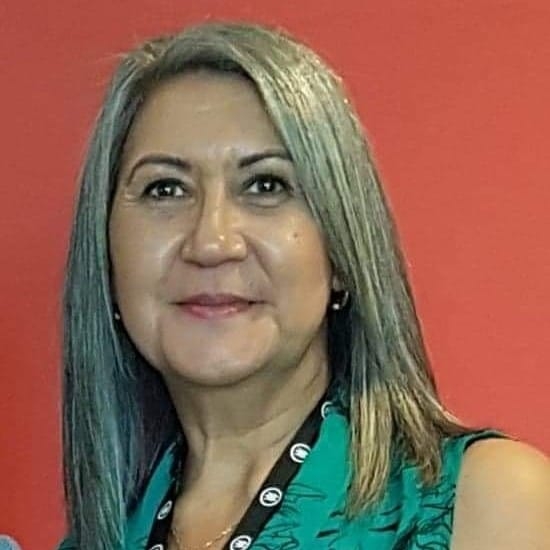 As the first Indigenous person, and woman, to work for a private broadcaster in Winnipeg, Vera Houle has carried three teachings throughout her career: be patient, be humble and be kind. The Sandy Bay Ojibway First Nation member was hired as a reporter in the early 90s before becoming news director, and now, director of community relations at APTN.

She was one of the few people admitted into a one-time program targeted towards Indigenous journalists, which helped her attain the training and education she needed to land her first role as a reporter.

She began working for CKY-TV, now CTV, as the first and only Indigenous person they hired. “For them to make that move, it was a very bold statement,” says Vera Houle, “I was front and centre, a reporter on air – an Indigenous reporter.”

All of this took place before APTN, the first network by and for Indigenous Peoples in North America, was established. The track record for Indigenous reporters working in the private sector across Canada was scarce. “The people in my community were beyond excited,” Houle recalls, “VCRs were recording all over my reserve, with my family members watching.”

But despite the excitement this milestone garnered, it did not numb the challenges that came with it. “Given the time, there was still that belief I was not a true journalist. There was a belief that I was there on a special government job. That I got a special government paycheck, because I was Indian,” says Houle.

That belief came from only a few coworkers in the office, but it was enough to remind her she was the only Indigenous person in the newsroom.

To overcome these moments of doubt, Houle would visit her community and participate in ceremony. It was there that her grandfather would often remind her of his three teachings, “I have to be humble, I have to be kind and I have to be patient,” she says.

After nearly a decade working as a reporter for CKY-TV, APTN opened its doors, and Houle was hired during the network’s early years back in 2001. “It was incredible,” says Houle. “When APTN started, I can’t even describe how enthusiastic and how happy I was.”

At the time, APTN only aired programming three times a week, but it was enough for Houle to feel reconnected with her community and for her community to feel represented. “People were so overjoyed and just happy.”

“There we were, people that looked like them, people that spoke like them, telling the stories of our communities, not only in the rural areas, but also in the urban areas,” she adds, “We were talking about our people in the city, what they were doing, where they were going, we had so many success stories to share. And now we've got triple that amount 22 years later.”

With the experience she gained and the knowledge she carried, Houle assumed her role as director of community relations at APTN and the work she does today reflects the passion she’s shown for the past 30 years.

Houle acts as the connection between the network and Indigenous communities across the country. “The community people come to me and tell me what’s happening in their communities and I turn around and share that with the appropriate departments,” she said.

But on a deeper level, Houle says her job “makes it feel like our communities are honest to goodness family”’ adding that she holds the job with honor.

Today, with over two decades working at APTN, the mother of four, grandmother to 12, and trailblazing Indigenous reporter says, “I am so content. I am beyond proud. I feel very at peace, knowing everything I went through paid off in the end.”

As for advice Houle would give to aspiring Indigenous reporters? No surprise: “Be patient, be humble and be kind.”